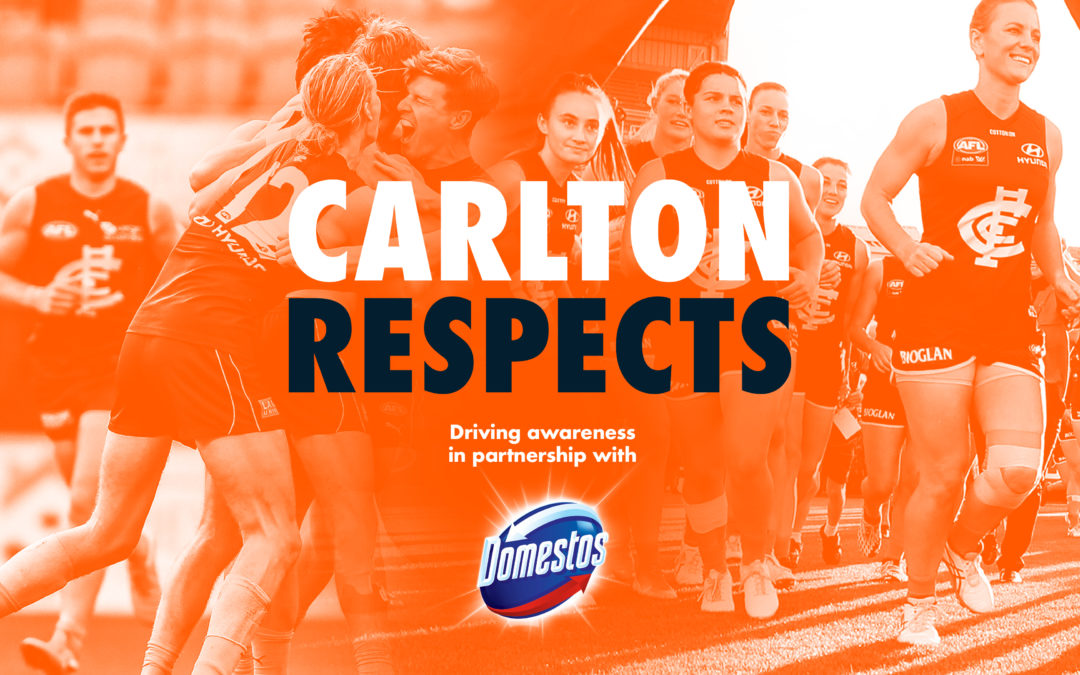 AHEAD of the Blues’ fourth annual AFLW Carlton Respects Game, the Carlton Football Club is delighted to announce a new partnership with Domestos.

In a multi-faceted partnership, Domestos joins the Carlton family as an awareness raising partner of Carlton Respects and a Gold partner of the Club, which will see their logo emblazoned on the Blues’ AFL Media backdrop.

Domestos’ alignment with the Blues also extends to the Club’s corporate network, becoming a Platinum partner of the esteemed Carlton IN Business program.

Carlton CEO Cain Liddle said the Club was proud to welcome Domestos as a valued partner, with the organisations aligning just days before the Blues prepare to once again pull their orange socks up to promote gender equality for the prevention of violence against women.

“Gaining the support of Domestos is a significant step for our club’s endeavour – through Carlton Respects – to tackle gender inequality within the Australian community,” Liddle said.

“Our partnership with Domestos is also a fantastic endorsement of our club’s strategic direction. To have a brand such as Domestos want to align with our football club as a result of our positive community impact is extremely pleasing from a club perspective.

“As a club, we’re really looking forward to working with Domestos as we continue our commitment in changing attitudes around gender equality for the prevention of violence.

GM of The BB Partnership, who is the Australian distributor for Domestos, Darren Corby said the company was proud to align with the Club and have the chance to build relationships with the broader Carlton family.

“We are very excited to partner with the Blues as a pre-eminent Australian sporting club, providing us the opportunity to develop relationships with Carlton members, supporters and organisations within the Carlton IN Business network,” Corby said.

“The passion of Carlton fans, the Club’s commitment to gender equality and it’s successful business network were all driving forces behind our decision.

“Sharing in the Club’s goal to achieve gender equality throughout the community is very much aligned to our own organisation’s values and our endeavours to make a difference, so we are very proud to work with Carlton in driving awareness through Carlton Respects.”

Domestos has played a vital role in Australian households since its introduction in 1981. It contains hospital grade disinfectant designed to kill germs and obliterate dirt and mould from around homes.

Its versatility means it can be used for cleaning tasks as diverse as toilets, showers, bathroom surfaces, wastepipes, drains and kitchens – anywhere you need hygienically clean results.

Domestos is also taking the war on germs to where people are most affected. In 2020, through its global partnership with UNICEF, Domestos committed to helping 25 million people have access to proper sanitation and a toilet.