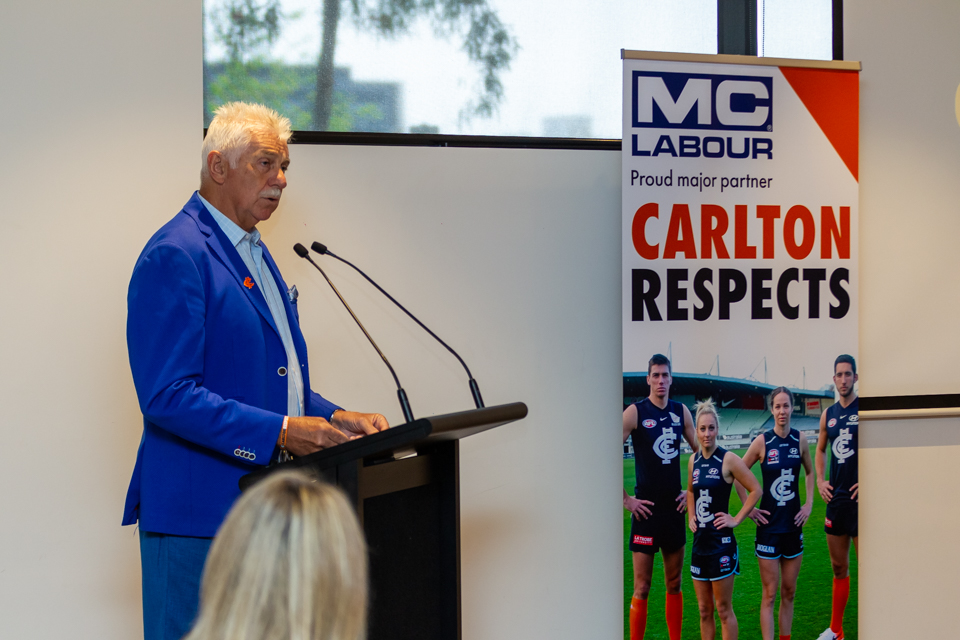 The Carlton Respects Workplace Charter is a program run by the Carlton Football Club that aims to unite the Australian business community through education around the importance of gender equality for the prevention of violence against women.

In a show of commitment to the Carlton Respects initiative, MC Labour staff from Victoria, South Australia and Tasmania attended the seminar alongside valued partners of MC Labour.

The keynote speaker was Carlton Respects Ambassador, Simone O’Brien. In 2012, Simone almost died at the hands of her former partner. She shared her story of her relationship with the perpetrator and described how the red flags of control and deceit culminated in a violent end to the relationship. Next to address the seminar was Cara Gleeson, the Director of Practice Leadership from Our Watch. Cara spoke about why solving gender inequality is part of the solution to prevent violence against women.

“All violence is abhorrent, regardless of whether it is directed towards a woman or a man. But the types of violence are different.

“Violence against women takes place where there is gender inequality. It happens when a perpetrator believes that a woman is lesser than they are,” explained Cara.

Cara went on to say that the key to preventing violence against women is to involve the whole population in primary prevention.

“We are becoming part of the solution just by being here today,” she said.

During the closing remarks, MC Labour’s Relationship Manager John Morris thanked the founders of MC Labour, Marc and Cath, for their ongoing support and commitment to Carlton Respects. “Thank you for creating a culture and environment that allows us to take this pathway to work towards gender equality,” he said.

The Carlton Football Club would like to thank MC Labour for their continued support as the proud major partner of Carlton Respects.